THE SURROUNDINGS, ART AND CULTURE

THE SURROUNDINGS, ART AND CULTURE

Less than an hour’s drive from Hotel Europa and Sirmione, you shall be surrounded by numerous cultural possibilities and places to visit: you can reach Mantua, the town of Duke Gonzaga and where Palazzo Te stands, Brescia with the Santa Giulia Museum and numerous historical and artistic proposals, Verona with the Arena and the beauties of the historic centre such as the romantic Giulietta’s House core setting of her love story with Romeo narrated by Shakespeare, as well as Venice and Milan reachable with only one hour by train.

Still around the lake you can instead go to the discovery of Desenzano del Garda with its Villa Romana, the castle of Manerba and the Vittoriale degli Italiani, the dwelling-monument of Gabriele D’Annunzio.

The Opera Season in the Arena is an experience without equal in Verona, it takes place in the summer (June-September), with the most famous arias and romances, as well as concerts, theater reviews and shows. 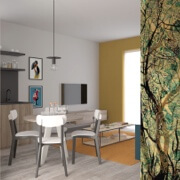 The Residence Il Melograno and the Hotel Europa are owned by the Dalle Vedove family, hoteliers in Sirmione for two generations.